We had a lovely last week in Nelson Bay, being able to get out and about a bit more than the previous few after my little accident. On the long weekend, Billy’s brother and his partner and two of their friends came up to stay, which was a nice opportunity to get to see them all one last time before we shipped out. We took a little trip out to Stockton Beach, which is famous for its sand dunes, which appear to just go on forever. Billy tells me they ship sand from the dunes there to beaches in Hawaii but I’m not sure if that’s actually true or not (sometimes he tells very convincing mistruths), so I cannot confirm this for sure. It was a gorgeous day, and we were lucky enough to see whales playing off in the distance from the shore which was cool. They are all migrating north for the winter, so it’s apparently really common to see them pass up the coast at this time of year. That being said, it was my first whale sighting so it was pretty exciting for me! 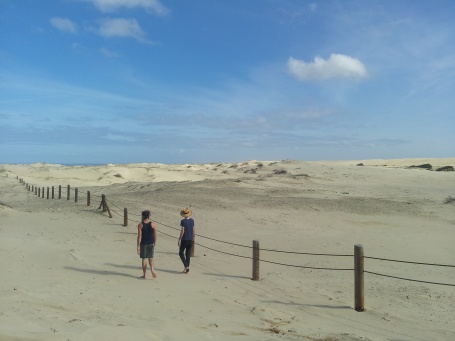 The long weekend also coincided with the Bluewater Country Music Festival, which was happening all around Port Stephens, but predominantly in the Bay. I love it when things like this pop up unexpectedly, especially when it’s something that you might not have normally gone out of your way to attend. The little town of Nelson Bay came alive, with performers on every corner of the town, market stalls along the waterfront and gigs at pretty much every venue in town each night. There was even – wait for it – the longest line dance (for charity) down the main street on Monday morning. You better believe we were going to be there for that!

It was amazing! I think the count was over 100 people, some of whom were very happy to have their photo with us. Billy even managed to get a few dancing tips… 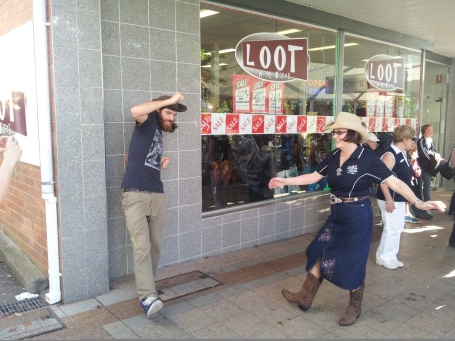 We spent the next few days repacking, reorganising, fixing little bits here and there, doing loads of washing and so on, preparing to get back on the road at last. We picked wednesday for a set of date, which also happened to be Billy’s birthday, so we had a nice farewell lunch with Billy’s grandparents and set off in the afternoon. I made an Orange Poppyseed cake (subbing poppy seeds for chia seeds as we had them on hand), which was absolutely delicious. You can find the recipe over at Veggieful’s beautiful blog – go check it out, there are loads of mouthwatering recipes accompanied by stunning photos. I just discovered this blog the other day when searching for the perfect cake, and am already hooked!
I tweaked the recipe a tiny bit, adding extra juice and zest as the oranges I had didn’t have the strongest flavour. I made about double the icing as well, so that I could do a middle layer. This picture doesn’t do justice to the deliciousness of the cake…not my best icing effort, but trust me – the taste made up for it.

Billy rated it his third favourite cake, after this one that I made for his birthday last year, and the VWaV carrot cake. It’s definitely going to be added to the cake rotation!