Today I’m hitting you with a double band, mostly because I wasn’t sure if you would let me get away with using the Banana Splits as a band. I think it’s valid, but I’ve got Bananarama on backup – just in case!

For those who don’t know, The Banana Splits come from an old TV show – the Banana Splits Adventure Hour – featuring Fleegle, Bingo, Drooper and Snorky. The show was totally before my time, however, my love of bananas alerted me to this awesomeness some years ago. Mascots of madness! Banana heroes! And cool fact for ya: the song at the bottom was written by none another than Barry White. Enjoy!

As for Bananarama…you really need to set aside a good couple of hours just to watch their videos. THEY ARE AMAZING. Think you don’t know Bananarama? You are wrong. I guarantee you will know at least three of their songs. Think “I’m your venus, I’m your fire, your desire” or “more more more, how do you like it how do you like it”. Yeah you know it! And can you believe they are still going? 30 something years on? BECAUSE BANANAS ARE POWERHOUSES!

Also, I just realised that I posted two banana recipes in a row. It certainly is bananarama!

Ruby is certainly a fan.

First prepare your fudge sauce. Heat coconut cream and agave in a small saucepan over medium low heat until it begins to simmer. Turn off heat and add chocolate, whisk until combined.

Assemble your split! Place banana on either side of ice cream scoops. Top with some fudge sauce, then whipped cream, sprinkles, nuts, honeycomb and more sauce. Go crazy! 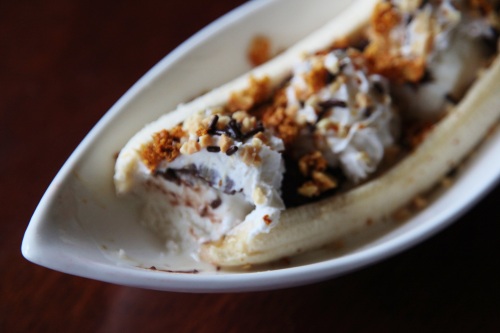