I was in Perth a couple of months ago, staying with family. Unfortunately it wasn’t a leisure trip – my wonderful Grandad who had been unwell passed away. This was a pretty devastating experience for our family, and for this reason it is not something that I want to talk about at length with the internet, except to say that we love him and miss him more than words can express.

While there, we were able to catch up with the rest of our family which happens far too irregularly since moving to Victoria. This included spending a few nights with my Granny down in Mandurah, which of course involved a few meals out. Since I was last there, a newer cafe called Something Raw has opened up, and with a menu full of vegan options it was definitely worth a look. 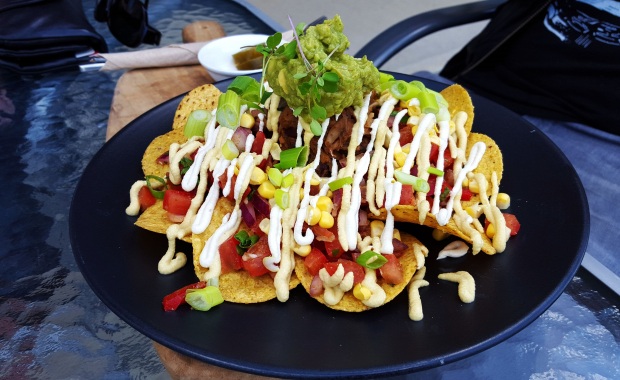 My brother and Granny both went for the Jackfruit nachos, and although I was pretty jealous when they came out, they graciously shared some with me. As the name suggests, these were loaded up with pulled jackfruit along with fresh salsa, sour lime creme, cashew cheese, guac and a side of jalapenos. Boss nachos, I really enjoyed them. At $22, they may seem pretty pricey, but to be honest W.A prices are on the whole a lot higher than we over east are used to.

My mum went for the toasted green wrap – $16. This was packed with spinach, avo, chickpeas and olives, along with what I think was Bio cheese. Mum gave it the thumbs up, and from the mouthful I tried I could only agree.

I had the raw taco bowl for $19. This was loaded with lettuce, corn, salsa, guac, spring onions, sour lime creme and walnut mince, alongside some dehydrated crackers. It was a pretty decent serve, and tasty but I would have liked to see a bit more walnut mince – there wasn’t quite enough to spread through the bowl so I was left with a fair bit of lettuce at the end. I would also be keen for a side of jalapenos, but I was lucky enough to score some leftovers from the others’ nachos.

There are also have a bunch of desserts and drinks on offer, though we didn’t indulge as we were pretty full. I also find it a little hard to handover $12 for a smoothie, but as I said, I think this is pretty in line with W.A prices in general and I just need to suck it up when I’m there.

Something Raw Cafe is a welcome addition to Mandurah, and I hope to see them stick around as there was a serious lack of good veg options in town last time I was there. The only bummer is that it’s not on the foreshore – cos who doesn’t like having a meal overlooking the water? Small complaint though. Check this place out!