While in Sydney, we had the pleasure of eating at Funky Pies in Bondi. I had seen their pies stocked in the freezers of a few different health food shops, but was yet to try them. We actually ended up enjoying them so much when we popped through Sydney the first time that when we were back and vising the markets down at Bondi beach, it was the perfect excuse to eat there again!

Funky pies is a cosy little cafe, tucked off of the main street in Bondi, with awesome music and just a nice vibe in general. It only has about four tables – two inside and two out, but they also do take away. Not only do they offer pies, but also a variety of drinks, a small selection of sweets, and a few grocery items.

The first visit, in the absence of the famous ‘Funky Chunky’ pie, I went for the ‘Eezy Chick ‘n’ Cheezy’ pie – a combination of mock chicken chunks, broccoli, and mushroom in a cheezy sauce. Billy opted for the ‘Thai Spicy’ pie, which was also full of chickeny chunks, but with spinach and mushroom, in a mild Thai flavoured sauce. It wasn’t very spicy, as suggested, but still delicious. I wasn’t feeling super hungry, so I got the pie on its own for around $6, but for $10 you can add either salad and potato salad, or mashed potato, peas and gravy (which Billy couldn’t go past). I forgot to take snaps on our first visit, which was more incentive to go back the second time.

We managed to arrive earlier next time, which allowed us to secure the classic Funky Chunky pie. We got one of these each, as neither of us felt willing to share. This is your classic meat and potato pie substitute, so if you’re into that kind of thing this is great. It took me a while to get into ‘meaty’ veg stuff, as I never really liked meat to begin with. However, now that I can separate it from the actual idea of being meat (since it’s not!)  I can enjoy the textural experience for what it is – delicious vegan food! So in saying that, these pies were amazing! Chunky shitake mushroom pieces with thick gravy and a bit of mashed potato thrown in, inside the crispiest, flakiest pastry…just delicious! A nice fresh salad with balsamic dressing and a couple of mouthfuls of potato salad were just perfect to go alongside. Billy managed to make his disappear like magic and I caught him eyeing off mine, but there was no way he was getting any of this bad boy. 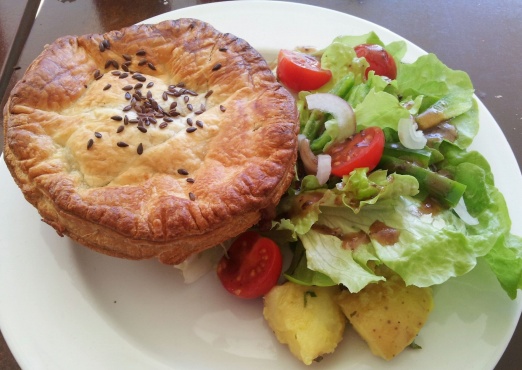