Does anybody using a wordpress blog ever have troubles with new posts from blogs you’ve subscribed to not appearing in your reader? This seems to be happening on and off to me…I’m missing heaps of wonderful posts! Or are there any other kinds of readers people use to subscribe to blogs that they find really awesome?

So where were we? After leaving Kununurra, we headed off into the West Australian landscape. Maybe it was the time of the day, or the fact that we were just so relieved to have made it across the border, but the scenery was just stunning. 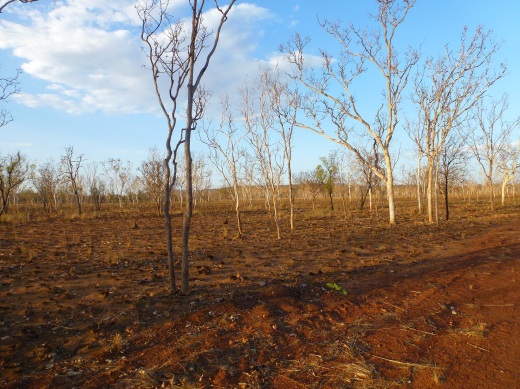 We travelled down the Victoria Highway, as our poor clunky van was definitely no match for the Gibb River road. 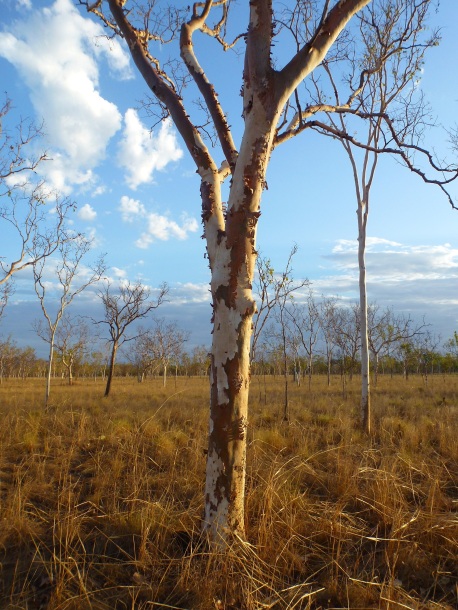 The weather was getting unbearable (for bears used to the cool breezes of Hobart) and we were fantasizing about being by the water in Broome, and praying that it wouldn’t be a mirage.

We had started waking up pretty early (and by pretty, I mean a very ugly 5am) when the sun was coming up, as most days it was getting to 30 degrees or more by 9am. With our early start, we hit Halls Creek by about 9am and did a quick visit to the little China wall – a natural quartz formation set in the landscape, which was a pretty interesting site. 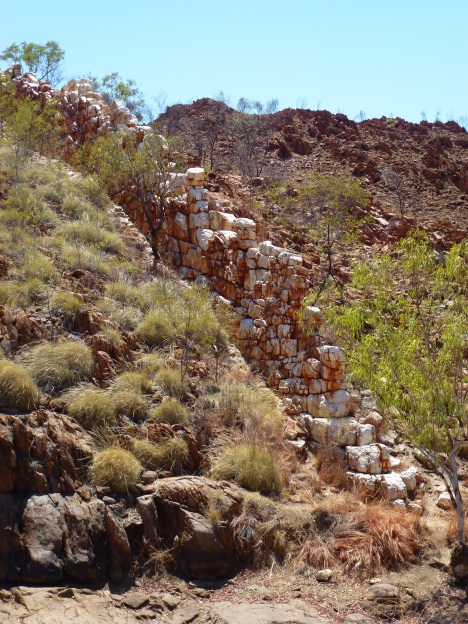 Wasting no time, we kept going until Fitzroy Crossing, where we stopped in to the Hotel to pause in the air-conditioning and enjoy a cold cider. We met a local lady at the petrol station there who took us down to the river and talked to us about her culture and some Dreamtime stories. While I think she was motivated by the need to find a lift home, I felt privileged that she was willing to share with us. 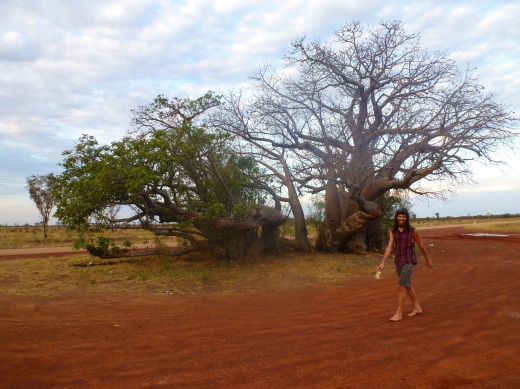 With the afternoon closing in, we decided to keep on truckin’, driving to a rest stop an hour or two out of Fitzroy Crossing. We stopped at the aptly named Boab rest stop to bunker down for the night, but ended up deciding to take off again. We had heard that there were markets and festivities in Broome once a month around the full moon to celebrate the ‘staircase to the moon’, a natural phenomenon that occurs when the reflection of the moon on the mud flats makes it appear as though there is, well, a staircase to the moon. We knew we were close to that time, and being a Friday we figured there was a good chance they’d be on that night. Onwards! 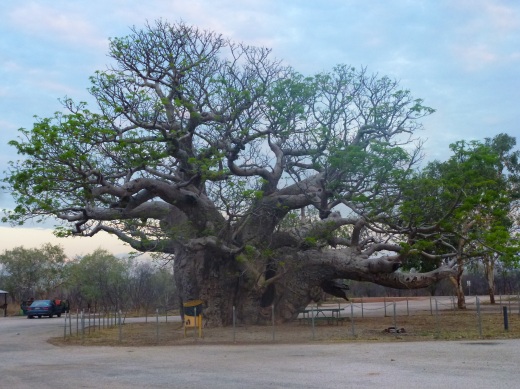 By about 7.30pm, we still had 150km to Broome and I was too tired to go on. We stayed overnight at a deserted rest stop and headed off early, reaching Broome by about 8am. After a truly disappointing breakfast at Aarli Bar (baked beans arriving with hunks of meat in them – my bad for not asking, was so hungry and eager to eat – but since when do baked beans come with meat? And if so, surely you’d write it on the menu? Annnnyway…) we headed over to the caravan park in Roebuck Bay to treat ourselves to a couple of nights of relaxed accommodation (and showers). (note: there was a cute little café further into town – I think it was called Dragonfly café or something. We ended up having a coffee there one day and the menu was pretty vegetarian friendly and looked like there were a few items that could have been easily veganised. Ah well, next time.

We were stoked to get a waterfront view, and we pretty much spent our days chilling at camp, swimming, and browsing the markets. The stairway markets were on Saturday and Sunday night just next to where we were staying, and there was a bigger market in town on the Saturday morning too.

We even had a chance to visit a neat little brewery called Matso’s to try some of their beer. Unfortunately we happened to go on an Oktoberfest themed day, and they had silly gimmicks like having to buy tickets at one end of the bar and then exchange them across the bar for a drink to make it more authentic (though I don’t remember any tickets at the actual Oktoberfest…). After getting over the shock of $12 pints – yep, definitely not in Melbourne anymore – we managed to find a step to sit on amongst the crowd and listen to some shitty live music. The beer was decent though. I am keen to try their desert lime and ginger cider, but couldn’t tackle the environment at that time. Hopefully we come across it in a bottle shop somewhere.

We really enjoyed our short stay in Broome – apart, of course, from the ‘incident’ which kind of soured it on the last night. These things happen though, and nobody got hurt which is the important thing.

It sure doesn’t change my view of Broome being a really beautiful place. 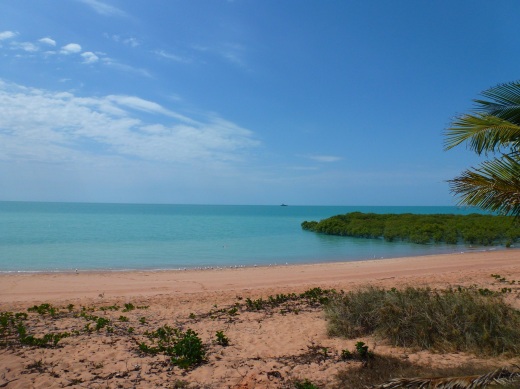 So I was really excited to share a post about our time in Darwin (and all the delicious things we ate at the markets there!), but instead I’m a little bummed out as we had a bit of an incident. While staying in Broome over the weekend, our van was broken into while we were asleep inside it. Crazy, I know.

They didn’t get much as most of our valuables were in the back with us, but they managed to steal my handbag from the front seat, which had my wallet, car keys, ipod, and all my usbs with the past year of travel photos on it, as well as some other bits and pieces – notebook, shells, etc. I am most disappointed about the loss of the usbs, as I have lost a lot of photos, as well as various documents from my uni life. Some photos are online, so I’m grateful to have those still, but a bit upset about the rest. We have spare keys, and I can get all the cards replaced (as annoying as it is).

When something like this happens, we often get fired up and hope for retribution. While I certainly feel unsettled that somebody came into our personal space while we were sleeping just inches away and stole personal items from us, I also feel frustrated that we live in a society that has vast inequalities, ranging from (but not limited to) access to decent health and education to disparities in employment opportunities and discrimination based on race, class, gender and sexuality. These inequalities can sometimes lead people down a path in which they feel that they need to commit acts such as theft to get by. Sometimes getting by may be feeding the family or paying the rent, and sometimes it also includes sourcing alcohol or drugs to feed addictions.

It seems to me that we have a big problem in our attitudes towards these situations, particularly when we can palm offenders of with labels such as ‘junkies’, ‘druggies’ or ‘drunks’, believing that ‘they’ve brought it upon themselves’ or that ‘they don’t want to change’ and that people always have a choice when it comes to the position they find themselves in. That we are all born into equal opportunities with equal resources available to us. This is not the case. I am aware that I am very lucky to have been raised by a loving family who had the means to take care of and provide for me financially as well as in terms of love, health, education, and so on…but everyone is so lucky.

I would love to have not been robbed, or to get some of my stuff back, but what I would love more is for us to work harder on finding solutions to the problems that are driving people to theft and petty crime in the first place.  I am not trying to justify crime or theft, but I really think that we need to divert some more of our attention to the underlying causes of it in order to do our best to prevent it. Punishment is not prevention. Phew.

As for our time in Darwin, we spent most of it market hopping, as we explored EVERY market available to us in a weekend. That included The Mindil Beach night markets, the Parap, Nightcliffe, Rapid Creek, Palmerston and Coolalinga markets. It was a big weekend! The Mindil Beach markets probably had the best atmosphere, with busking and fire twirling as the sun set over the beach. There were lots of delicious treats at the various markets, we managed to find some vegan food at most of them, including some awesome rice paper rolls and delicious dragonfruit sorbet. I’m keeping my fingers crossed that my bag gets found and I might get my usbs back (often bags get ditched once any valuables are retrieved from it) so in the event that that happens, I’ll share some lovely photos from our time in Darwin.

In the mean time, I’ve got a couple of snaps on my phone from some of the places we ate in Darwin (after it recovered from the Y2K bug), so I’ll be able to do a little review of those shortly. Until then…!