I’m probably taking the easy path here, but I was struggling to come up with an idea for something blue that wasn’t drowned in food dye. I get that blueberries are not particularly blue when used to cook with, but blue makes up part of the word so I’m going to go with it. Also it’s pretty late and I don’t have time to come up with anything else. And these are pretty. 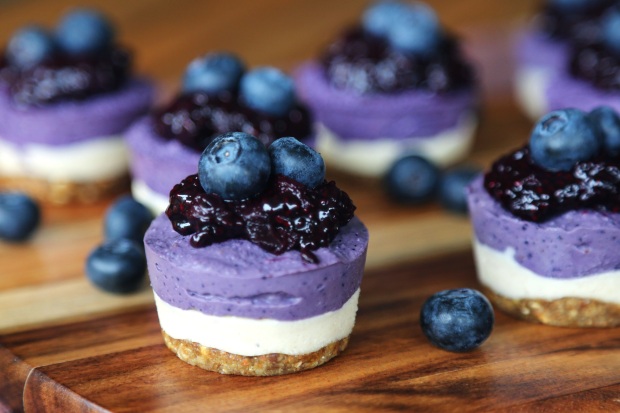 This may look more complex than it is because of the subsections of ingredients, but raw desserts are often very straight forward and easy. It’s just a matter of blending ingredients and pouring them in. The most time consuming part is the soaking and waiting for them to set.

I’ve got a bunch of these stored in my freezer now which I’m bringing out sporadically when I want a quick treat. As you can probably imagine, I’m sure these would be great with raspberries, strawberries or a combination of all of them. 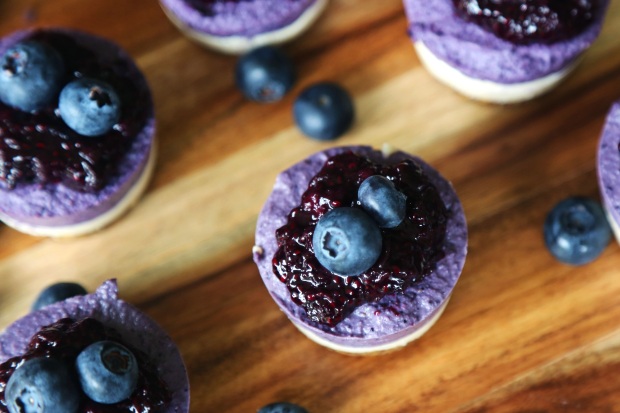 Start by preparing the base – combine all ingredients in a food processor or blender until they form a thick mixture. If it’s too dry, you can add a tablespoon of water at a time until it comes together – it should be tacky, but not so sticky that you can’t work with it. Break of small pieces of mixture and press into bases of mini muffin tray, making the base a couple of millimetres thick – I used a silicone tray as they were easier to pop out at the end.

Blend white layer ingredients until smooth. Pour evenly on top of the prepared bases, filling each case to about half way. Put tray in the freezer to set.

Now do the same with the blue layer – blend until smooth and fill up each case until it is level with the top – smooth over to make even. Return to the freezer to set.

To prepare the jam, place blueberries, agave and lime juice in a saucepan and bring to a boil. Turn down to a simmer and cook for 10-15 minutes, until the berries start to come apart. Using the back of a fork or spoon, mash some of the blueberries. Add chia seeds and stir to combine. Remove from heat and allow to sit – the chia seeds will absorb a lot of moisture and thicken the jam. Allow to cool.

Once the cheesecakes have set, pop them out of their moulds and top with a spoonful of jam and some extra blueberries. I find it best to keep these dudes in the freezer, taking them out 15 minutes before you want to eat them to allow them to soften a little. 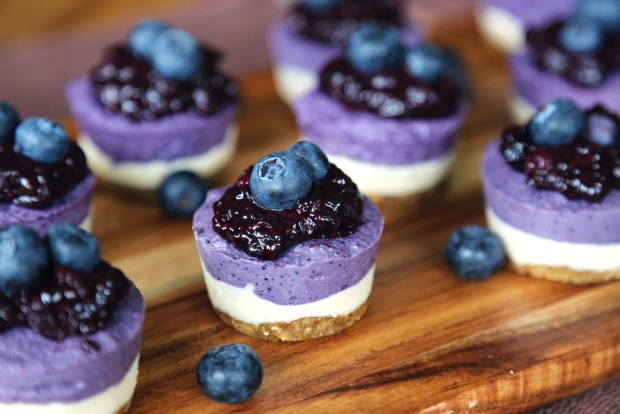