Since my parents invested in a dehydrator, whenever I’m going on a camping trip I like to pop around and make up some goodies (only to have to return a day later to retrieve them). I usually do a couple of variations of crackers, a few variations of fruit leathers and some fruit or veggie crisps – it’s a great way to pack nutritious snacks that are easy to transport and keep well, and the sky’s the limit when it comes to making up different flavour combinations. 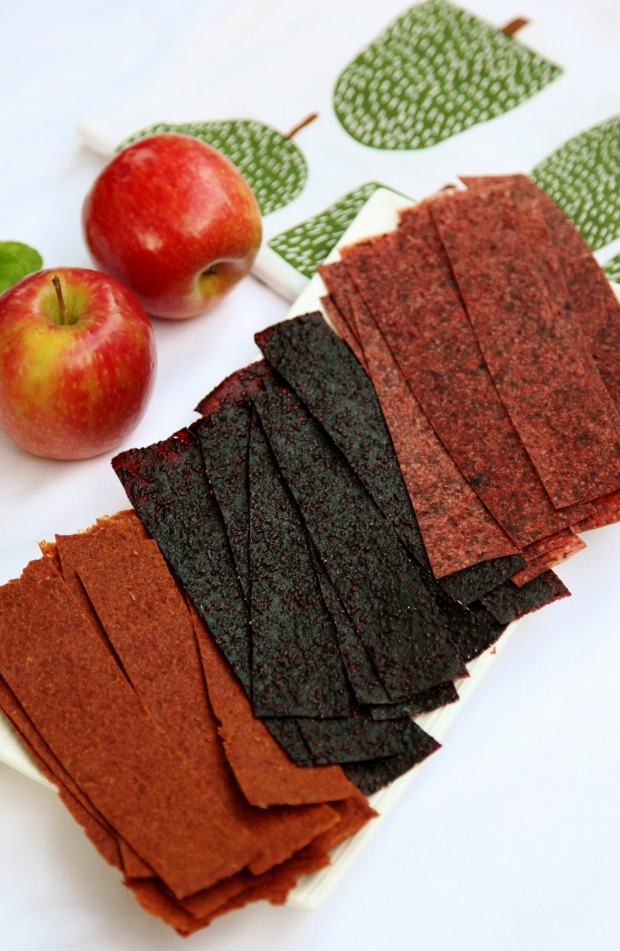 These are my latest three fruit leather blends. Instructions are very straight forward and apply to whatever combination you go with. I’m still working out some things with different fruits producing different textures – when I’ve used apples the mix tends to separate a bit and crack, others produce a stickier mix – regardless, all I’ve done have been tasty. 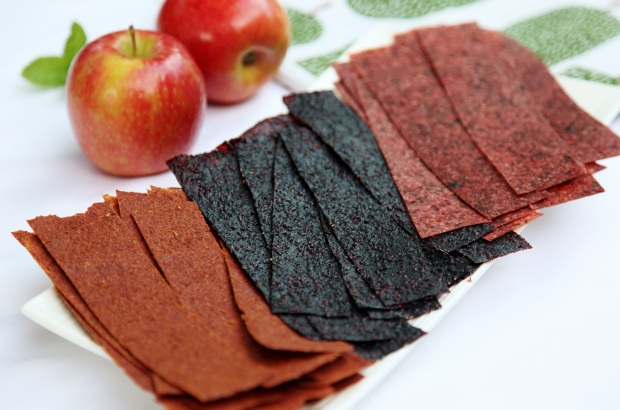 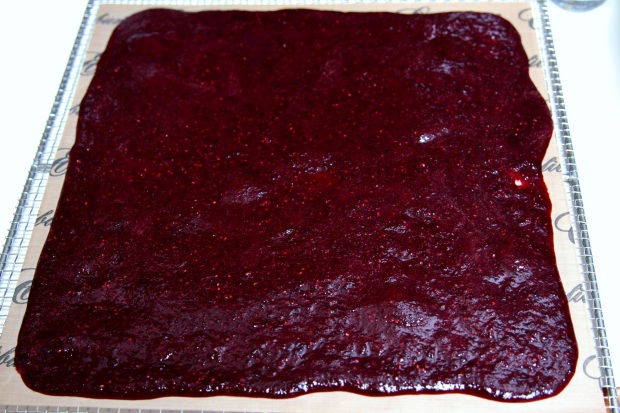 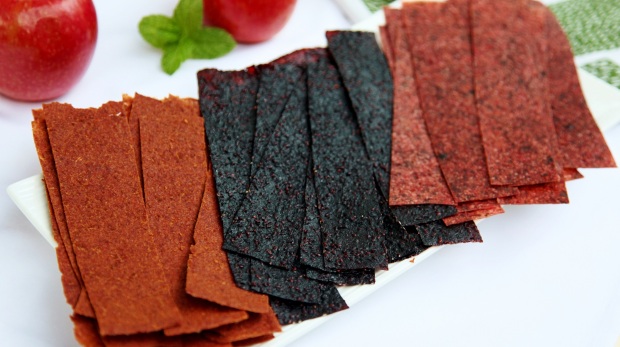 Chuck all your ingredients in a blender and whizz until smooth and of spreadable consistency. If it is too runny, try adding some chia seeds, and likewise if too thick add some liquid – either citrus juice or a spash of water. Pour mixture onto a teflex sheet on a dehydrator tray and spread evenly, to about half a centimetre or just a little more in thickness. Dehydrate at 60C for 1 hour, then reduce to 40C and continue to dehydrate for about 8 – 12 hours. The time will vary depending on the fruit, thickness, etc, so just check in every now and then to see if it’s ready.

I have seen some people instruct to peel and flip the leather part way through – I have not tried this method yet, but can verify that it seems to work just fine leaving on the one side. 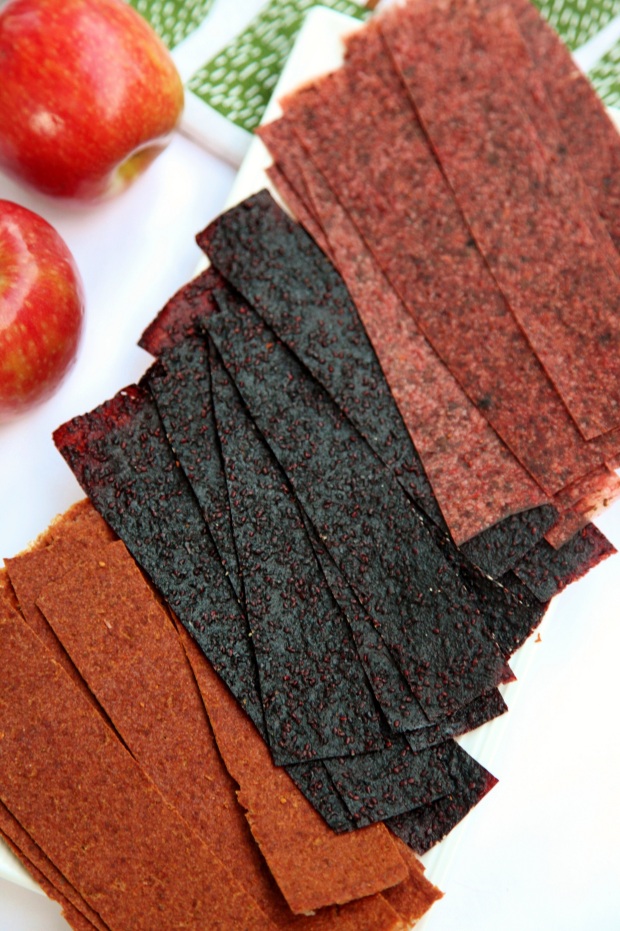 This recipe is magic.

I swear – you make it, and it just disappears before your very eyes. It’s really quite unbelievable.

I was trying to emulate the Loving Earth kale chips here – I love the thick chunky cashew-y bits. Once the base is downpat, it’s easy to play around with the herbs and spices to get different flavour combinations. These are my favourite so far though – a bit of cheese and a bit of a cayenne kick – the perfect combo.

It’s also worth mentioning that these can be done the oven, however I find they turn out much better in the dehydrator. Probably because the only times I’ve done kale chips in the oven I’ve left them too long and burnt the butts off them. Oops. 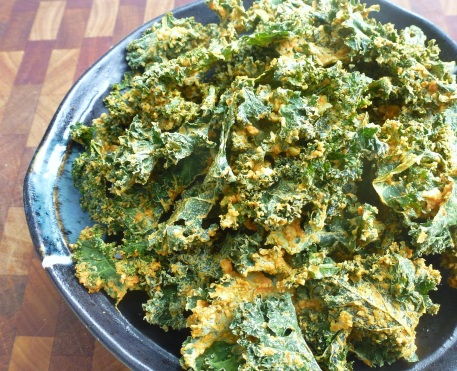 Place all ingredients apart from the kale in a high speed blender and blend to combine. I find it easiest to use the tamper to keep pushing it down. If required, add a little bit of water at a time until it reaches a smooth – but still thick – consistency. It should be ‘spreadable’.

Cut or tear the kale into pieces and place into a bowl. Give it a bit of a squeeze/massage to break down some of the tougher fibres, then pour the cheesy mix on top.

I like to get my hands dirty here, I’m sure you could stir it through with a spoon if you prefer. Mix the cashew cheese amongst the kale, ensuring each piece gets coated. Apart from being a bit of fun, using your hands means you can fill the curls up with mixture, which I love.

Spread kale out on teflex lined dehydrator trays, and dehydrate for 6-12 hours, until crispy.

And voila! Watch them disappear!

Listen up! I’ve got a new favourite raw snack thanks to Veganopolous, who gave me this great idea in her post last week.

I was already planning to get the dehydrator going on the weekend to make some more crackers, but I needed some ideas on what to fill the other trays with. Her post was very timely! As soon as I saw her picture, I knew I had to try this stuff. CAULIFLOWER POPCORN.

I decided to flavour it cheese and onion style, because it’s been forever since I’ve had that flavouring. I swear, this took me back to eating cheese and onion crinkle cut chips. They feel really junk foody, but minus the junk! Best thing is, they are so simple to prepare.

I’ll share the quantities I used below, but obviously these are very adjustable according to your taste. 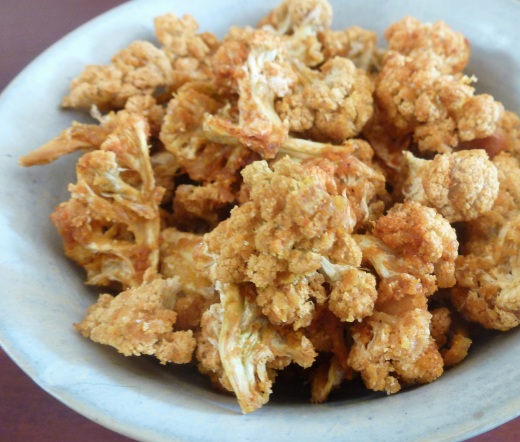 Cut cauliflower into bite size pieces and place in a bowl.

Add oil and toss to coat.

Now add the rest of your seasonings – yeast, onion powder, salt and cayenne. Cover the bowl with a lid or plate and give it a good shake to coat all the pieces. Taste for seasoning and adjust as desired.

Pop the pieces onto a dehydrator rack with a teflex sheet on it and dehydrate at 45C for 8-12 hours, or until crispy.

This could also be adapted and cooked at a low temperature in your oven.

And voila! Delicious, crispy and ADDICTIVE popcorn bites. The main issue I noticed is that when storing them, they tend to lose a bit of their crispiness. However, this doesn’t have to be an issue – they are seriously so moreish you will have to fight not to eat them all straight out of the dehydrator.

Hey there blogosphere! I am still here!

I took a bit of an impromptu break amongst all the craziness of getting back to Melbourne, weddings, christmases, breakfasts, lunches, festivals and so on. Y’know how it is.

So a quick recap – the engine in our van gave up while we were in Perth. We went to great lengths to source a new one, which happened to be in Albany in W.A and managed to get the van down there and have it replaced. By this point, we were running out of time to drive back to Melbourne (or we could have done it over 3-4 days, but had no time to stop and look at anything and it would have cost a fortune in fuel comparatively), so we sold the van in Perth (sob..bye ZZ) and flew back to Melbourne. The end!

And what a year it’s been! It’s so hard to believe it’s happened – once you have been traveling for a while it just becomes life. So it’s strange to be in one permanent place, but also great to catch up with friends and family who have not been seen enough over the past 3-4 years. I think the trick will be to keep things happening and keep life exciting. That’s what it’s for right?!

I hope all of you had a safe and happy holidays. We had a wonderful Christmas, doing the family rounds and having a great breakfast, lunch and then leftover dinner. Yum! 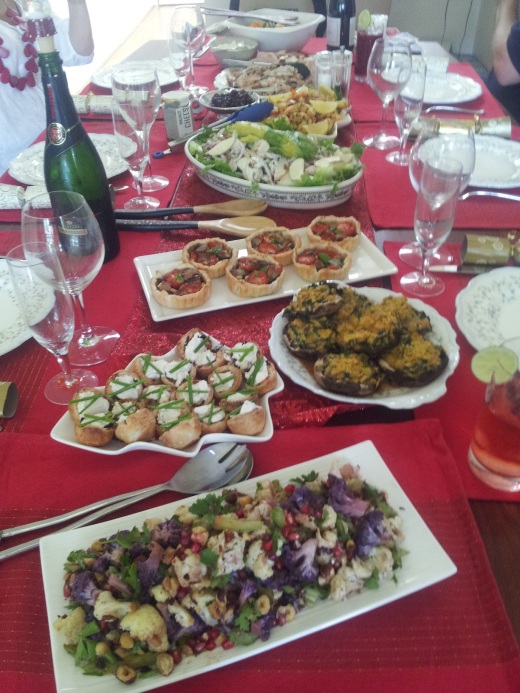 While it was an ‘omni’ Christmas, we had one of the best vegan layouts yet..with stuffed mushrooms, tomato spinach and pinenut tarts, onion tarts, pumpkin chickpea and green bean salad, waldorf salad, purple cauliflower hazelnut and pomegranate salad and more. SO. GOOD . 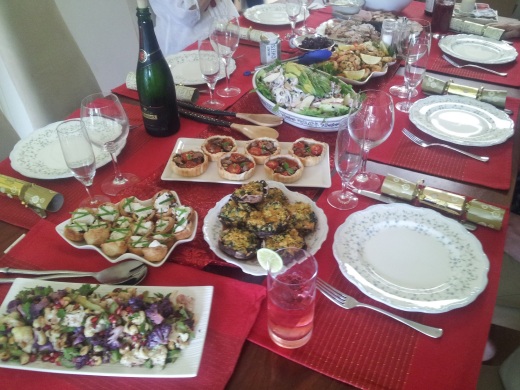 Excuse the blurry pictures, I think there was dirt or fog or something on my screen all Christmas (probably food smears) and I didn’t notice! 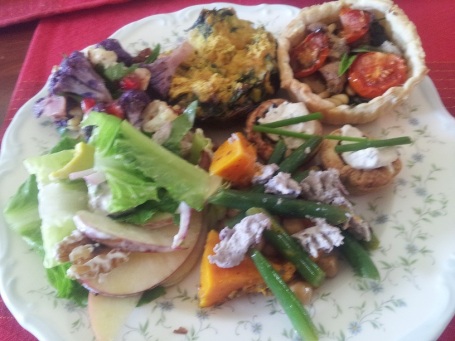 And then check this out….not one, but TWO vegan desserts. My mum made this beautiful raw chocolate tart with raspberries (using avocados and banana). 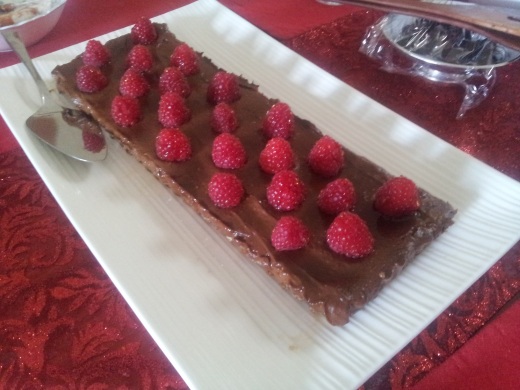 And I made this apple and ‘honey’ semifreddo from Hannah Kaminsky’s blog, which went down a treat too. Dessert heaven! 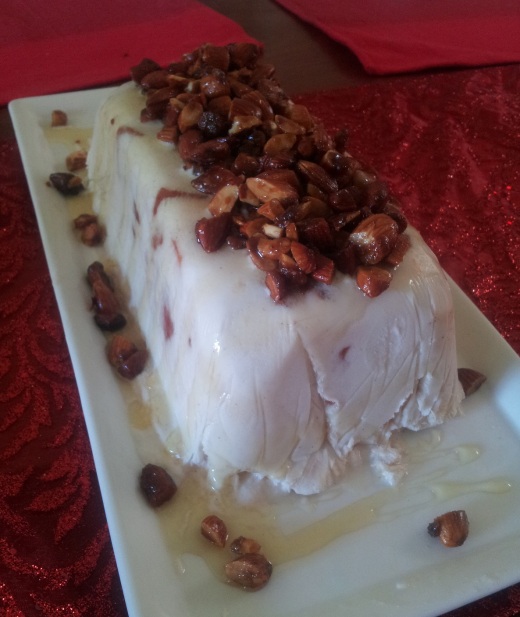 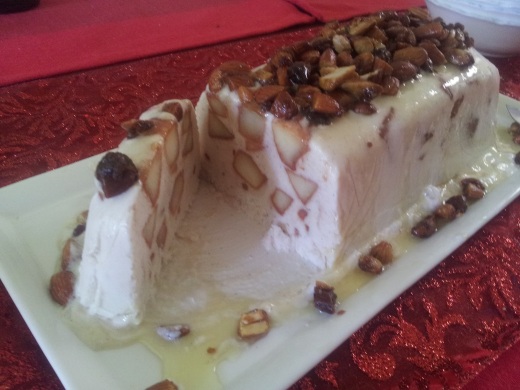 It’s safe to say that we were preeeeeeetty full after that load.

I got some wonderful gifts this year, including a bunch of food related stuff. Check out my whizz bang new blender…duh duh duh duhhhhh. 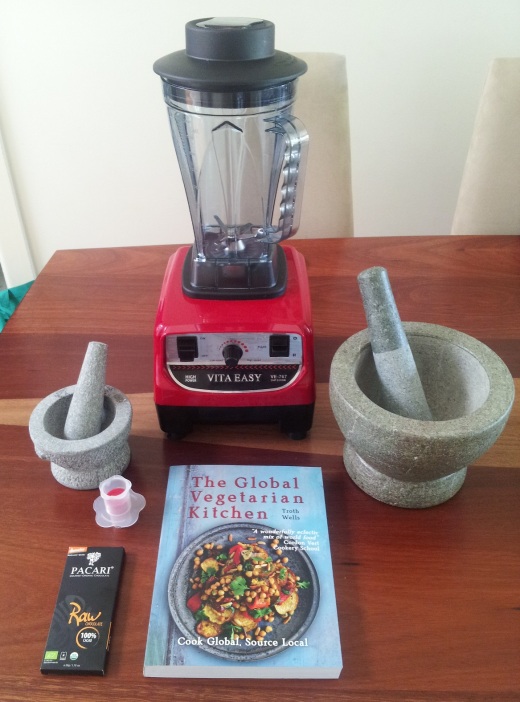 Also some super heavy mortar and pestles for doing some super grinding, some raw chocolate, a beautiful cookbook and a cupcake decentre-er, hehe. Lots of new stuff to play with!

On top of that, my mum and dad (who I am currently residing with upon returning to Melbourne) got themselves an Excalibur dehydrator. More toooyyyyyysss! 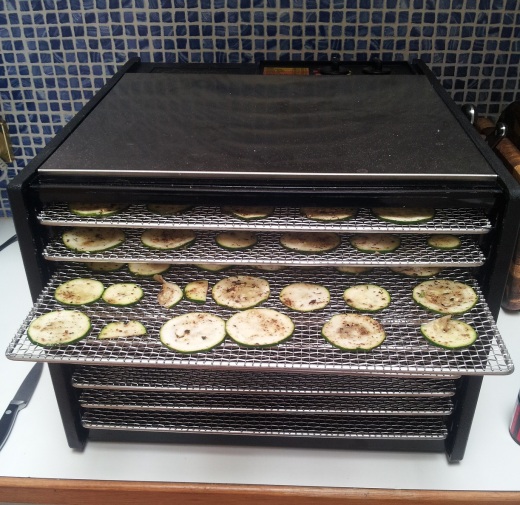 Here are some zucchini chips on the go. I’m excited to try some crackers and pizza bases and the like….it’s opened up a whole new world!

So wowzers, that was Christmas! Afterwards I dashed off to the Lorne Falls Festival to work at a food stall over new years, which was a blast, and now I’m back for a few weeks before heading to Rainbow. Yaaaay!

Hope you’ve all had a fantastic start to 2014 x