I’m sure you’ve all heard of the hot new place in town – vegans and non-vegans alike are buzzing with the news. Yep, those awesome folk over at Smith & Daughters have opened up their own deli, just around the corner on Moor St, aptly named Smith & Deli and stocking everything you could possibly need, from sandwiches to salads, premade pizzas to hot soup, coffees to herbs and spices. I’m yet to step inside yet, but Faye at Veganopoulous and Cindy and Michael at Where’s the Beef? have taken some great photos of the snazzy interior.

While I have not had the opportunity to visit them in person as of yet, I am lucky enough that my bear had a free day and offered to pop by Smith & Deli and meet me on my lunch break with some (read: LOTS) of their goods to share. You can imagine my excitement when I was greeted with this:

At first the bear apologised for getting all “his type” of foods, but I was pretty sure any food from Smith & Deli was going to be my type of food so I was not too worried.

First up, we split a “Rubenstein” sandwich – pastrami, sauerkraut, pickles and Russian dressing on rye bread. This is my second reuben style sandwich ever, and I’m loving them more with each try. Everything about this was perfect, from the thickness of the bread to the tanginess of the generous filling. 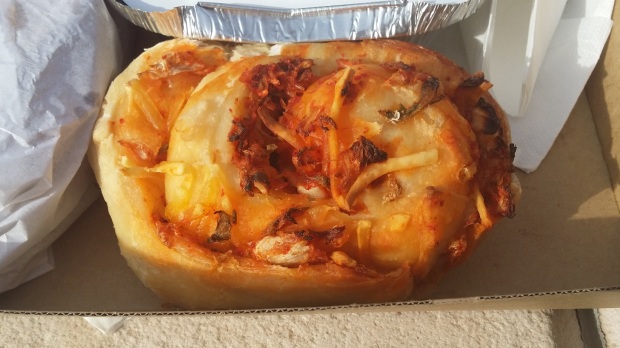 Next up, the kim chi and cheese scroll. Are you kidding me?!

Seriously. So de-freaking-licious I can’t even. The bread was so soft and while I thought the kim chi might be a bit too mild in amongst all the dough, it had an excellent kick.

Our last savoury course consisted of a steak and curry pie. This probably wouldn’t have been my first pick, though at the same time I want to eat EVERYTHING on offer, so how could I not be happy with this? 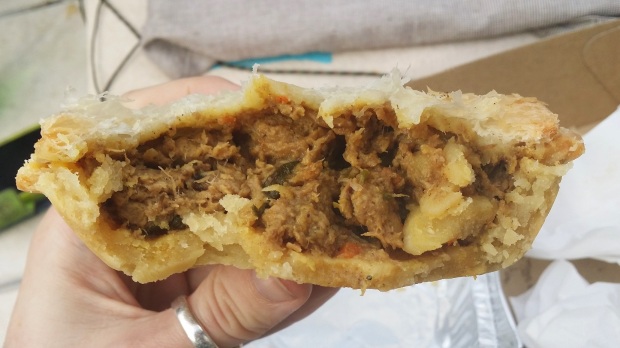 At first we were not blown away by the pie, as we were still coming down off the awesomeness of the last two things. It’s a steak and curry pie. However the more we ate into it, the more we realised that it was a bloody good pie – if we hadn’t already stuffed ourselves with goods beforehand, we probably would have rated it higher to begin with. The pastry was good, there was a strong curry flavour and a generous amount of melt-in-your-mouth ‘steak’ interspersed with chunks of vegetables. Nothing to scoff at! 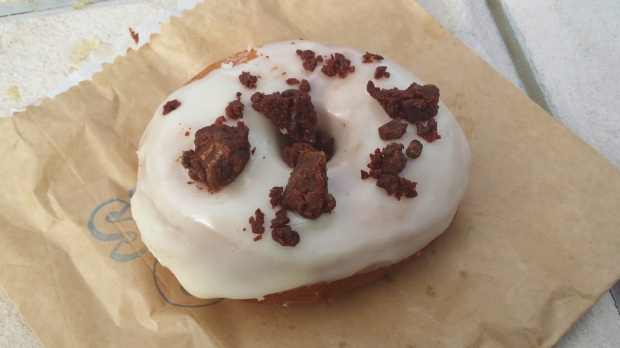 Oh you thought it was over? Nohohohohooo.

As if there wouldn’t be sweets! Bear brought this doughnut – I’m not actually sure what it was and neither was he – he said he was so overwhelmed he just pointed at things. It had kind of brownie chunks on top? Sweet, delicious, and almost enough to tip us over the edge.

We had to go for an ambulate so we didn’t go into a food coma. While walking, the bear (after previously professing his love for Smith & Daughters by declaring we must eat there weekly) announced that this was his new place, and he was “a deli boy” now. Fine by me. I have a whole deli of treats to work my way through!